Me in boston, you in California

Let me tell you something. The world is small, very small. The probability of randomly finding someone on the internet that is somehow linked with you is much bigger than you would think.

Now let me explain this story. Turns out I was, as usual, doing some wanderings in various food blogs. Somehow I came across 'Cuina per a llaminers', a blog written by Merce, a catalan girl who lives in California. The blog was love at first sight and I immediately checked the 'about' section. I was pleased to find out she's in cali doing a PhD in Chemical Engineering, which is exactly what I hope to be doing next year. So I posted a comment on her blog and told her about me, chemist, living in the US, catalan as well... and about how much I like her blog.

Merce replied and told me she had also lived in Boston for a year, while she was doing her final undergrad project at MIT... which is exactly what I was doing last year. It seemed too much of a coincidence so I asked her if she happened to have graduated from IQS, my college, which has an extensive exchange program with MIT. Which is exactly how she ended up there. At this point I was laughing at how ridiculously small the world is.

I found the whole thing very curious and amusing, so I told Merce we could post the story in our blogs. The story would be paired with a recipe that both of us would make and write about, me in English, she in Catalan. For the occasion, we chose 'black bottom cupcakes' from Lovin in the oven. 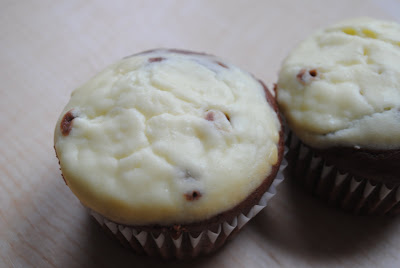 The cupcakes were very moist and chocolatey. My cream cheese part didn't sunk in to the chocolate part as Kim's did (Merce had the same issue), nor did it really taste so cheesy. But anyway, they were definitely good and even better when warmed up and spread with some blackberry jam (yes, we have an obsession at home with this out of this world jam).

My adapted recipe follows and you can find out about Merce's adaptation here.

Line muffin tins with paper cups.
In a bowl, mix cream cheese, sugar and egg until homogeneous.
In a large bowl, mix together the flour, 1 cup sugar, cocoa, baking soda and 1/2 teaspoon salt. Add the water, oil and vanilla. Mix until blended. Fill about half of the muffin liners with this mixture (ice cream scoop is ideal for this). On top of it, drop a tablespoonful of the cream cheese mixture. Bake for 25 to 30 min until a toothpick inserted comes out clean. 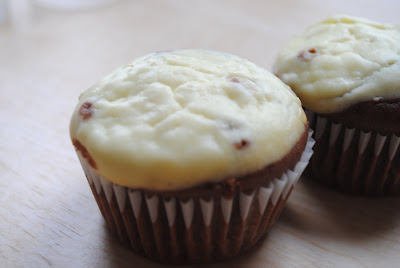 Now, if you're not yet tired of reading and you're still wondering about the weird post title...
Remember that twin girls movie called 'the parent trap', in which one of the twins lives in Boston and the other one in California? In Spain, the translated title of the movie was something like 'You to Boston, me to California'. which describes perfectly Merce's location and mine. Thus the title adaptation and the post name.

Happy baking!
Posted by Adriana at 3:40 AM

Oh no--I'm the odd one out. We'll have to touch up on the Spanish lessons sometime!

The chances of you two having all that in common, PLUS baking, is just...wow. Crazy, man.

You should make these up with the blackberry jam mixed in with the cream cheese! I bet that'd make every cream cheesy recipe in the world taste better. *drools*

First time to your blog and love your space. I am not much into desserts, but your pics are tempting me to bake! What an interesting story! World is so small.