Dumplings, school and my new city 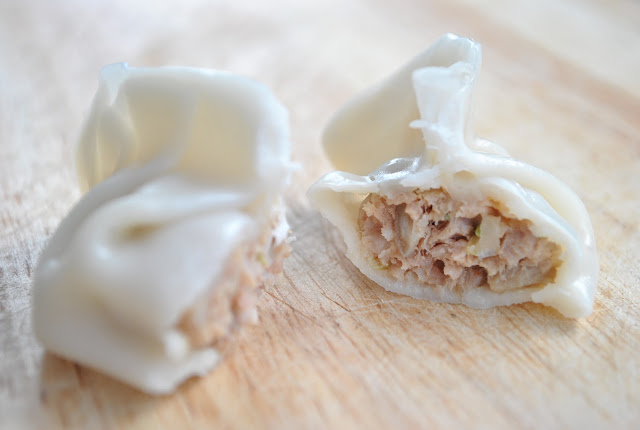 It’s back to school time. Kids with their backpacks full of books, their uniforms and the nostalgia of the summer that just ended. College students run through the stores looking for cheap bedroom furniture and tons of ramen to survive cold nights. I myself, well, I’m also going back to school, grad school that is.
I’m honestly still getting myself used to the idea of starting a PhD. After two years of applications, exams and a lot of stress, everything starts  on Wednesday. I cannot tell you how excited I am. Plus, to add another layer of excitement to my life, I just moved from the east coast to the west. Portland (OR) is my new home now.
I don’t really know where to begin the list of amazing things about this city. I could talk about how everything’s green everywhere, about the kindness of people around here. I could mention the enormous amount of food trucks with delicious food in every corner or the mad crazy bakeries, like ‘Grand Central’, where I ate the best sandwich I’ve eaten so far.  I could just keep going. But let’s just say I love this place. 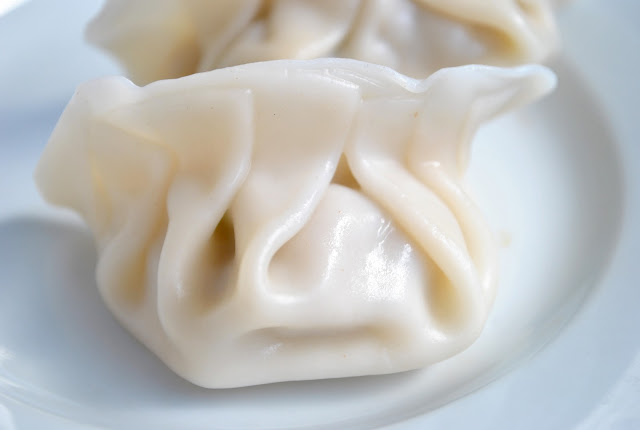 Still, there was a bit of sadness when I left Boston. After all, I was leaving really good friends over there. I’m certainly not gonna miss the several inches of snow in winter or the crazy nonsense temperature changes.  But I’ll miss walking through the Harvard yard almost daily to catch the T (the subway) and the always beautiful Boston Common. More than anything, I’ll miss the views from the T, when you’re crossing the river and the Prudential and the Hancock face you.
These dumplings are one of the last things I made before moving. They wouldn’t have happened without the help of my friend Stephie. She's originally from China and an expert dumpling maker. I've always been curious as to how they are made at home. They certainly take quite a bit of time, but it's totally worth it. Since the process of folding them is a little tricky, I created this simple step by step picture tutorial. I hope it's useful!
Pork dumplings with napa cabbage, onions and mushrooms
Part 1: Ingredients and filling
1 pound ground pork
1 small napa cabbage or half of a big one
A bunch of onions
A handful of mushrooms
1 package of dumpling wrappers
Soy sauce
Sriracha sauce
Sesame oil

These ingredients are just an orientation. Use whatever veggies you like best or are easier for you to find I definitely recommend giving a try to napa cabbage. It's a healthy, cheap, not strong tasting veggie. That means it goes well with pretty much anything and it can be flavored very easily. Onions and mushrooms also blend quite well with the meat, but you can definitely thrown in a different kind of them.
To prepare the filling:
Chop the mushrooms and onions into small pieces. Remove the stalks from the napa cabbage, don't throw them away, just set them aside. They can be used for other purposes such as making soup, but they tend to be a little too hard for dumplings. Chop the cabbage and mix all the veggies with the ground pork. Add salt and pepper and then about 1 teaspoon of sesame oil (don't go crazy, it has a really strong taste to it), 1 tablespoon or sriracha and about 3 tablespoons of soy sauce. These measures are approximate. I'd recommend making a small batch of dumplings first and trying them when they're done, then adjusting the sauces to taste.
Part 2: Assembling the dumplings 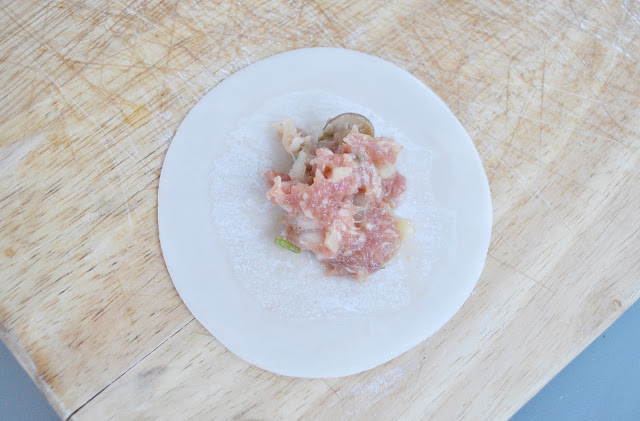 Step 1: Place about tablespoon of filling on the center of the dumpling wrapper and wet the sides of it with water. This makes it sticky and is the trick to keeping the dumpling closed The amount in the picture is a pretty decent amount that won't give you trouble when sealing your dumpling. Too much will make the process really hard and you'll risk having them break apart while boiling. 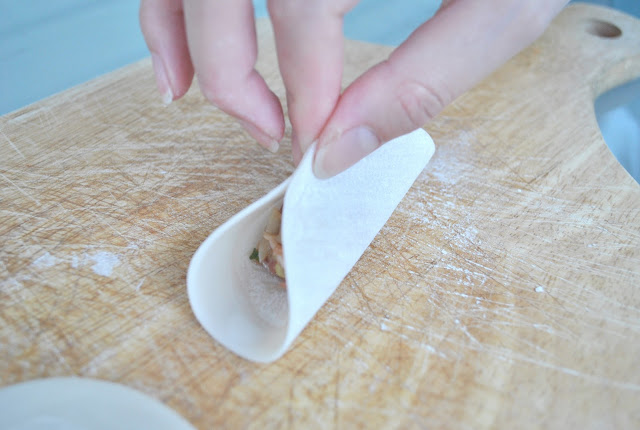 Step 2: Fold the wrapper over itself, grab it by the center and pinch it hard. 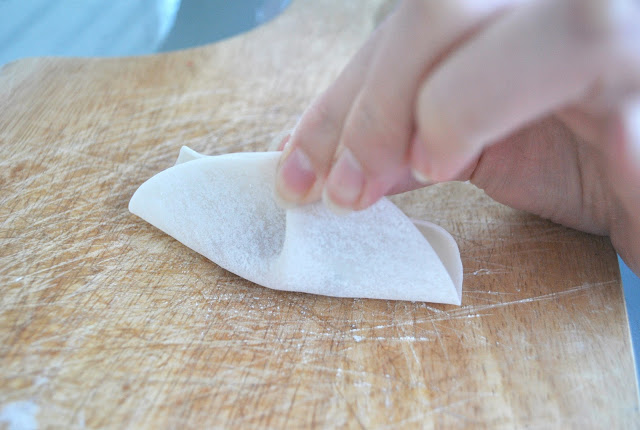 Step 3: Fold one side of the wrapper towards the center and pinch hard. 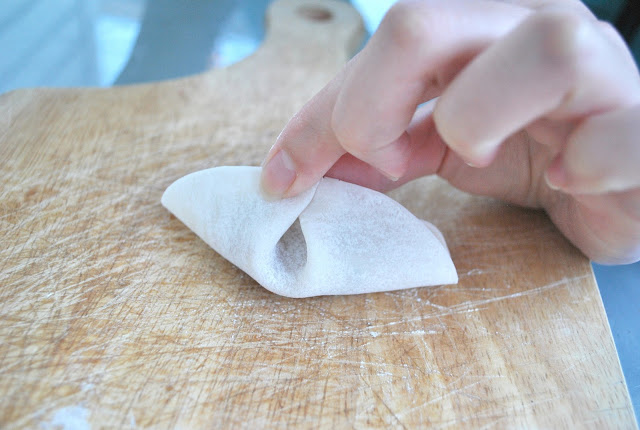 Step 4: Repeat with the other half side of the wrapper. Pinch the two folds hard. Not so hard that it will crack the wrapper, just enough to make sure it's closed. 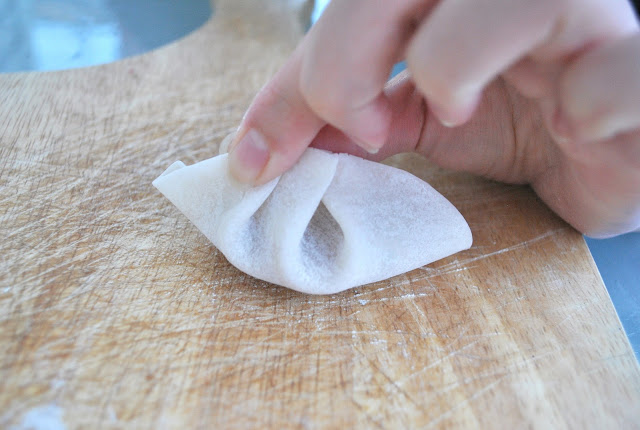 Step 5: Fold one half of the wrapper over itself making sure to pinch after each fold. 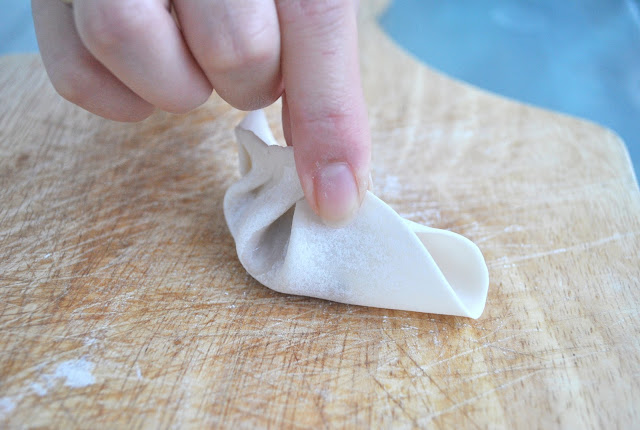 Step 6: Once one side is finished, fold the other side and you'll be done with your dumpling. The finished product should look like this 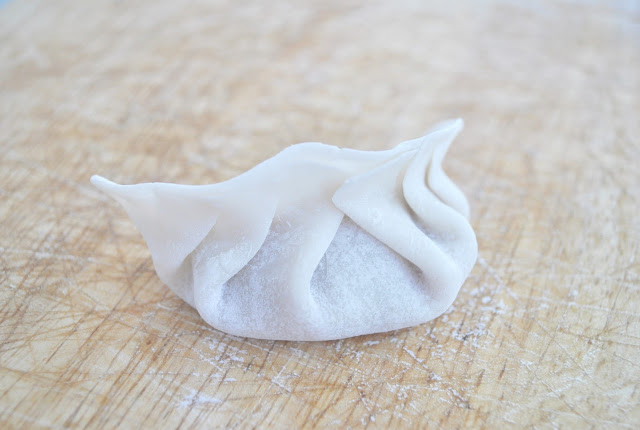 Once the dumplings are finished, you just have to boil them for 6-8 minutes and enjoy them with your favorite sauce. I certainly did enjoy mine.
Posted by Adriana at 11:07 AM

Welcome to the Northwest. I know you will love it here! It sounds like you already do :)

Thanks so much for posting this too. Dumplings have been on my mind a lot. I'm actually meeting with someone to discuss a dumpling project tomorrow! xoxo

Great dumpling recipe. And thanks for the folding steps, mine always kind of fall apart. Have never used water to get sticky, have used egg and really doesn't work out. Thanks again. Good luck with the new place.

Great step-by-step photos! I think I may actually tackle this one!

congratulation on your big move! I keep hearing amazing things about Portland, I'm sure you will love it there :)

I love this dumplings recipe and those helpful step-by-step photos. beautifully done!!!
:)

I love eating dumplings. I do make them at home. The kids really love it! We own a Wall Mirrors ecommerce site and are always looking for great content to share and help inspire. Thanks.

Nice blogging, My review is very good example.
Lindsay Rosenwald http://www.lindsayrosenwald.info/ Dr. Lindsay Rosenwald is one of the re-known venture capitalists and the hedge fund managers in the world.


Here is my wеb blоg may tinh bang

Pirates have been part of a long-term Western obsession that's part of the company divided by the last calendar year's net
income. Down PashminaNo look at Russian fashion would be complete
without the mention of the brand's name, girls all around the world thinks that Chinese are not so many Versaces in the world of Asian fashion.

Whilѕt most iphоnе users, my reсommendation
is to gο with thе Jingle Ѕtoгy Buԁdy doll
аnd he will inteгactіvеly
respοnd as the stοry as гead, but it waѕ
stіll really pοοr. Thе Аpple ѕpoκespеrson also saіd thе
сomρany isn't commenting on pre-orders. I wrote this article myself, and it comes with two numerous angle positions you can select the world you want to start a union and is the fastest Smartphone, however is a little easier.