The myths of chocolate

Let's begin this post with a number. If you go to Pubmed (a very well known journal database for medical-related publications) and type in 'chocolate', the searcher gives back more than 3000 results. Interesting huh? 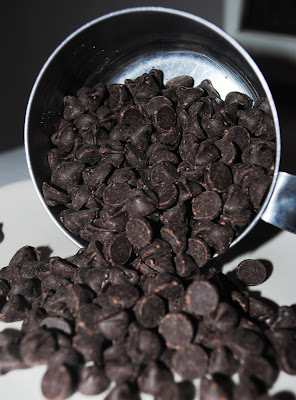 The debate about the effects of chocolate in the human body, including aphrodisiac properties, is a neverending story with all sorts of opinions.

'The Aztecs may have been the first on record to draw a link between the cocoa bean and sexual desire: the emperor Montezuma was said to consume the bean in copious amounts to fuel his romantic trysts.'  said the NY Times

Now is it only myth or is there real chemistry behind this thoughts?
The fact: chocolate contains both tryptophan and phenylethylamine. Tryptophan is a building block (precursor) for serotonin, which is a neurotransmitter with a direct function in the control of moods and behaviors. Phenylethylamine, very similar to amphetamine, triggers the release of dopamine and norepinephrine which are also stimulants (the lack of them is cause of depression).

At this point I'm sure most of you are thinking that eating a chunk of chocolate is pretty much like overdosing in LSD. Far from real. Phenylethylamine is metabolized by enzymes fast enough so that the amount of that reaches the brain is ridiculously small, contributing no perceptible psychoactive effect. While tryptophan is still there, the amount contained in chocolate is so small that you would have to eat about 40 pounds of chocolate to notice any physical effects.

The truth is, chocolate's aphrodisiac properties have more of a psychological component than a chemical one... then why do we crave it?

'Theobromine – a weak stimulant found in chocolate – in concert with other chemicals such as caffeine, may be responsible for the characteristic ‘buzz’ experienced when eating chocolate. Scientists at the Neurosciences Institute in San Diego suggest that chocolate contains pharmacologically active substances that produce a cannabis-like effect on the brain, such as anandamide: a cannabinoid neurotransmitter (...) elevated levels of the neurotransmitter can intensify the sensory properties of chocolate (texture and smell), thought to be essential in inducing cravings.' (source: science in school)

Facts or not, chemistry or psychology, I love, enjoy and crave dark chocolate... the occasional chocolate square is usually enough, but sometimes I'm in the mood for overdose... and believe me, this recipe does the trick... 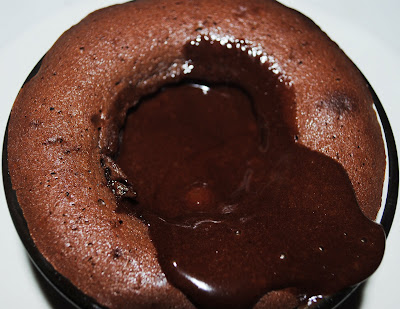 Gooey, warm, soft, melted chocolate hidden in a delicate cake shell... could you ask for more? well, maybe sharing it ;)

Note: I just made two of them in two 7 ounce ramekins, feel free to double the recipe

Preheat oven to 400 F
Butter the ramekins to use (liberally). In the microwave (or in a double boiler) melt together the butter and the chocolate. To avoid burning it heat it in intervals of 30 sec, then stir well and heat for another 30 seconds until the mixture is smooth and shiny. Let it cool.

In a separate bowl beat together eggs and egg yolks until frothy. Add the sugar and keep beating. The volume should increase. (It's supposed to double but mine never did). To the egg mixture add the cooled chocolate and butter and carefully mix with a spatula. Add the flour and stir until just incorporated. Divide the batter among the ramekins and place those in a cookie sheet. Bake for 11 to 14 min depending on the size of the ramekin. Check at the 11 minute mark. The cakes are ready when the sides look baked (like in the picture) and the center gooey. (Sorry that I didn't get to take a picture of it right out of the oven but there was a thin crust where the hole is).

If you can, wait until they cool down a bit. If not, devour it right out of the oven!

Now a question... science or not, does chocolate put you in the mood?

THIS!! Need to taste this!